Problem to be solved

The reloading workbench is 24 inches deep, but I have just been using 12" milk crates to store things, and lost track of anything that got pushed behind them. The crates slide surprisingly poorly on the concrete, and don't hold that much stuff. 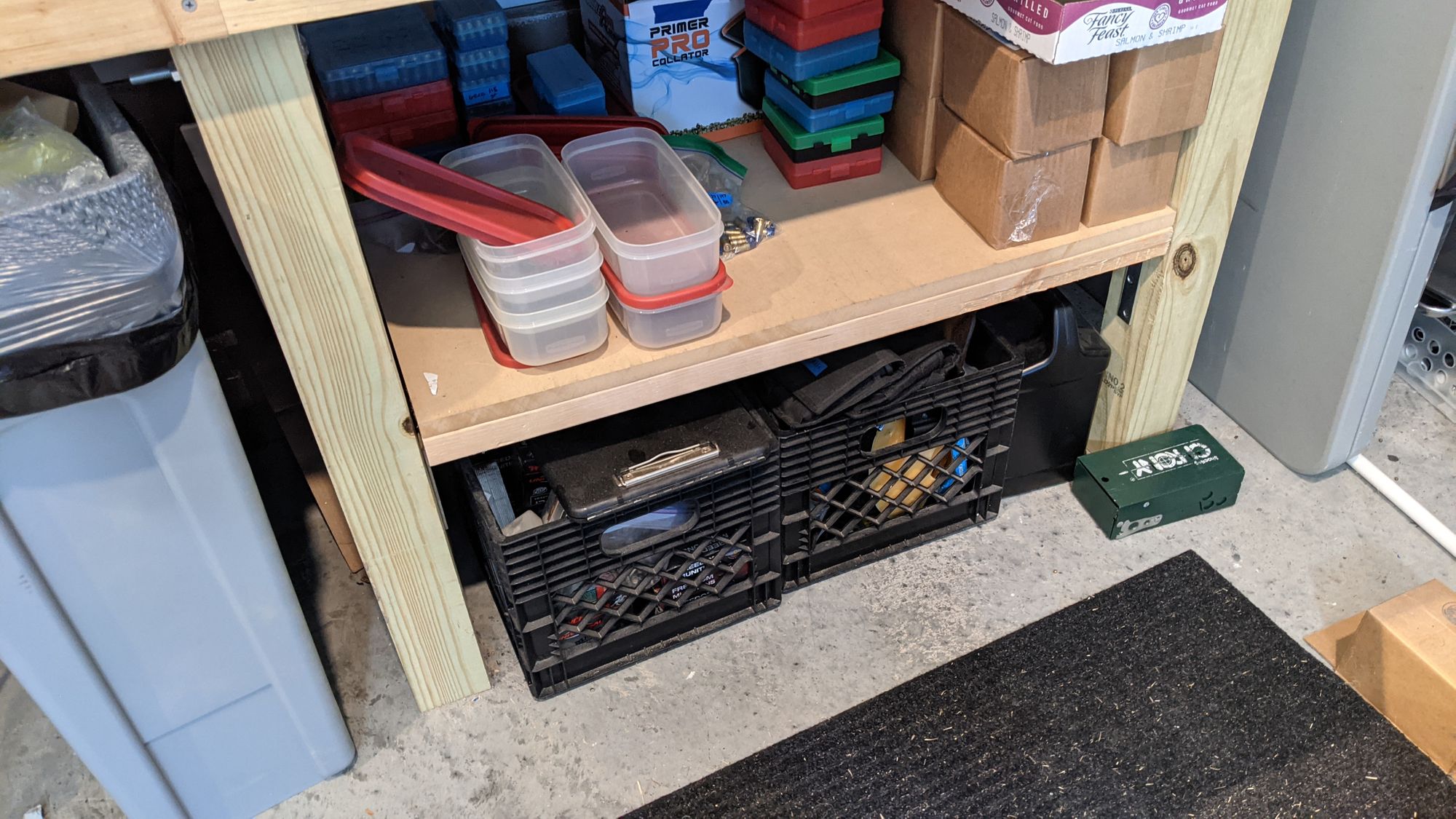 Use the full depth, width, and height of the space under this shelf, and build two "drawers" that are just platforms on non-swiveling casters.

The scrap wood pile had a good piece of 3/4" plywood to form the base of each drawer, and as much 1/2" MDF as I could possibly use. (Seriously, I ended up building each box twice, and still didn't even use half of what we had on hand leftover from other projects)

Originally I was thinking I was going to use screws to hold the sides to the bottom and to each other. This didn't work out well, primarily because putting a 2" screw into the edge of MDF caused it to split pretty severely without pre-drilling. Additionally, trying to keep the .18" wide screw from poking out either side of the .50" wide MDF was very tricky to do. Solution: 2" nails from a nailgun. No pre-drilling needed, and somewhat easier to keep inside the confines of the MDF, especially as I went along and got better at holding the nail gun straight up and down.

Having a table saw to cut the sides of the boxes would have saved a ton of time, but as it was I had to make do with a circular saw and clamping a board of exactly the right to act as a cut guide.

The biggest time-sink was having to re-make the boxes because I managed to mis-measure the available space by about half an inch on every dimension. I built the first box and it was both too long and was rubbing quite a bit on the shelf above it. So that box was disassembled (this is one place that screws would have been easier than nails, even if the wood itself had been a loss), and cut to be shallower and shorter. Then I built the second box to the same specs, and the two boxes just barely wouldn't fit next to each other.

So that one too got deconstructed, trimmed down to be an inch slimmer, and rebuilt. Like I said, lucky that we had plenty of scrap MDF to use up. 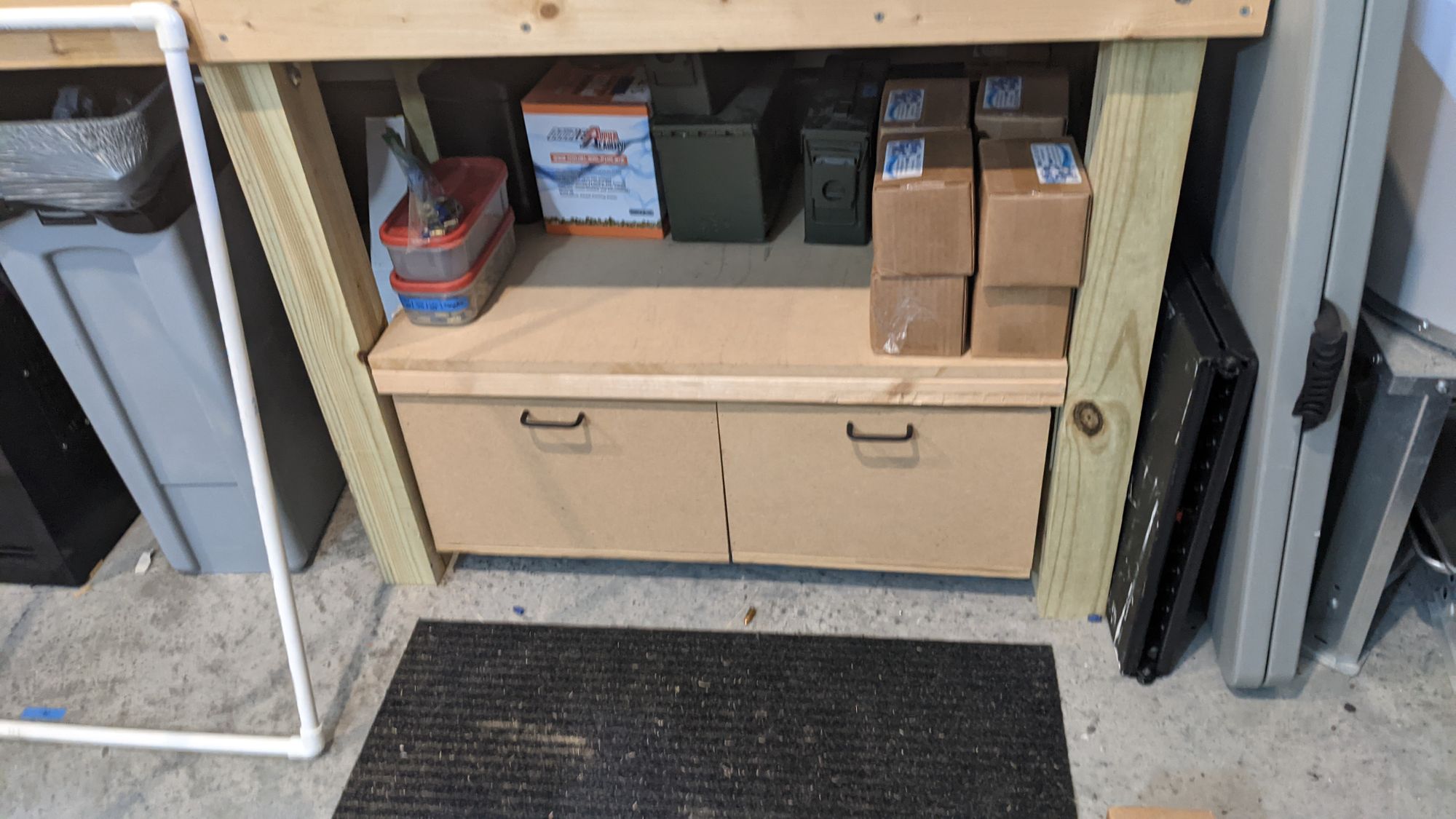 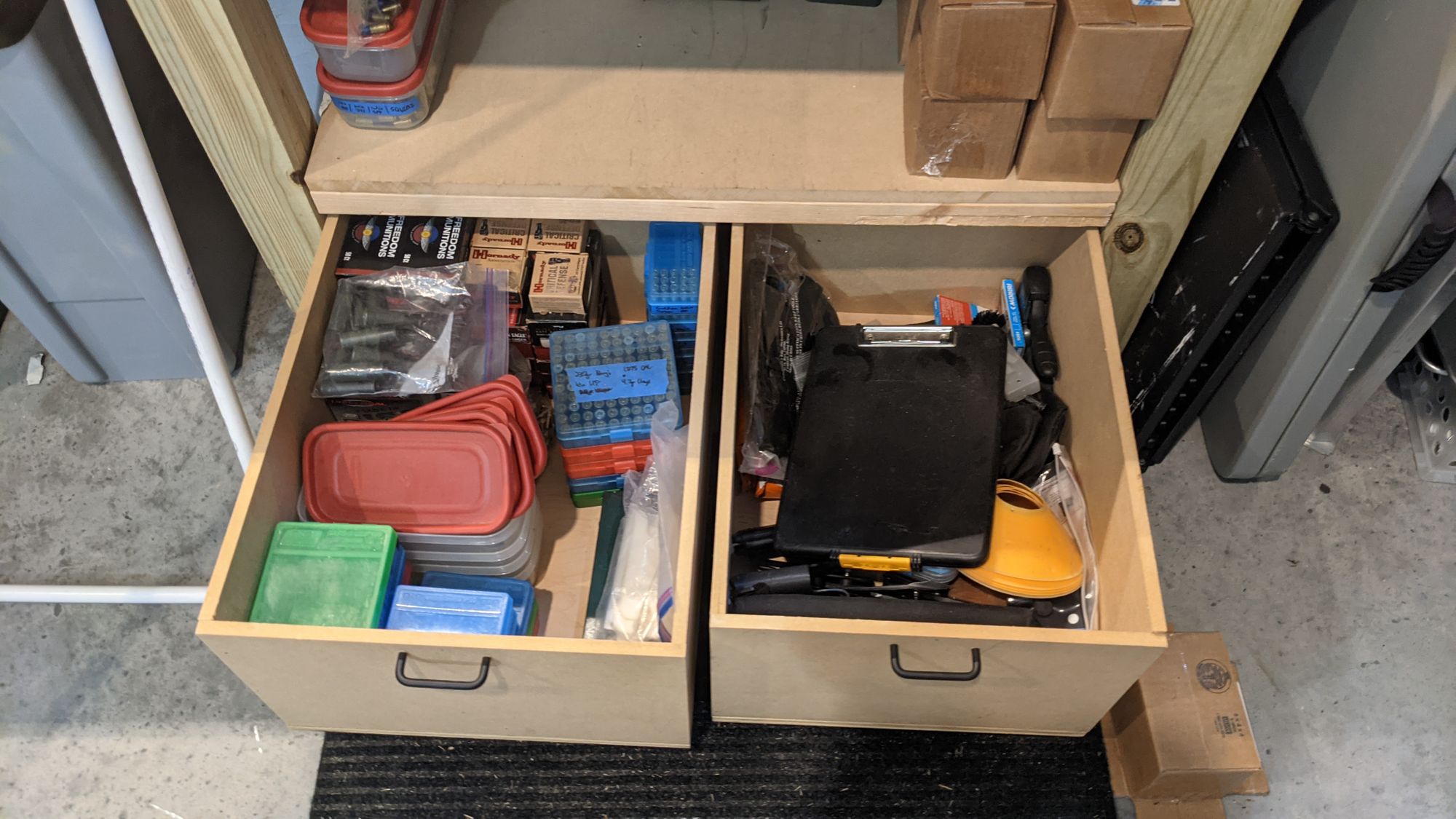 The final product works quite well so far. The 2" casters are just enough to ride over the little carpet mat I have there with no problems, and the 3/4" ply bottom should be plenty strong for a while.

I was thinking I would glue and screw the MDF sides for extra strength, but I'll admit I was pretty surprised how tight the nails held, so I didn't bother with the glue. Most of the weight should be straight down and not out to the side anyway.

I am fully prepared for the MDF to bow or fall apart in a few years, and to rebuild the boxes properly with plywood at that point. But as a Version 1, these are a huge improvement, and already make the space under the bench much more usable and accessible. I was originally worried the drawers would be too shallow to be really useful (approx 11" deep) but being able to access everything from the top so far has been very convenient.

I don't have comments on my posts, but if you want to reach me, email me at my first name at benb.us.